Originally a funeral home that was built in the 1920’s the Rose & Crown Pub is now a large neighbourhood pub with a bustling outdoor patio that overlooks 4th Street Southwest in downtown Calgary, multiple rooms and levels to enjoy good times and great conversation with friends and live acoustic performances every week.

With a selection of both local beer as well as the standard fun selection of stouts that you’d expect at a traditionally styled pub, this pub is an attractive destination for those who love good beer and good times.

But there are a few extra surprises on tap at this particular bar that make it even more compelling for those who desire a little extra thrill, or even chill, in their day: Three ghosts.

I recently had the pleasure of getting a special tour of the building with the bar’s General Manager Dennis Madden. He shared several stories and showed me around the bar to areas that are normally not accessible to most patrons: the third floor attic and the basement. 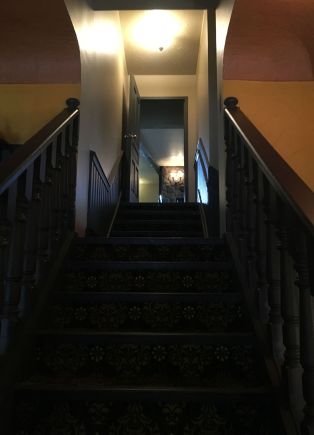 The Lady in the Big White Dress & The Middle Aged Man

A second ghost, who has been described as a middle-aged woman often seen wearing a large white and billowing dress, has also been reported over the years as having been spotted in the pub. And a third one had been described as a similarly aged nondescript man.

While the little boy is the most often seen of the three ghosts, all three are believed to be responsible for the odd sounds of people walking around upstairs when that floor is completely vacant and of neighbours reporting seeing lights flickering on and off in the middle of the night long after staff have vacated the building.

During my visit, General Manager Dennis Madden shared with me both the picture and the tale of a pair of women who were traveling from the United Kingdom and stopped in at Rose & Crown because it reminded them of so many of the pubs back home, even one that had the same name.

They took several photos of themselves there, eager to share with local friends the fun atmosphere of a Canadian pub that mirrored ones they so enjoyed back home. This was in an era prior to digital photography, so it wasn’t until almost a month later when they returned back overseas and developed their photos that they spotted something odd in one of them: what looked like the spectral image of a little boy standing beside them.

They thought it was eerie and sent a copy of the photograph in a letter to the staff, asking them if the pub might perhaps be haunted. When Dennis wrote back to them, he relayed the story of the little boy. And the two women were convinced that they had inadvertently captured his image on film.

The staff and management of Rose & Crown have embraced the eerie spirit of the legends surrounding the building, hosting Halloween-themed events and offering seasonal tours of the ghost.

In a nod to the creepy tales shared about the pub, General Manager Dennis Madden even mischievously placed a skeleton in the third story window, looking down onto the street. Laughing, he said that folks from the neighbourhood have been startled to see it when they look up.

There are many more tales that we’re collecting regarding this location, so you can be certain it will be a chapter in the forthcoming book which will bear the same name as the Spirits Untapped website/blog.

Fun and eerie ghostly tales, a decent selection of international and local beers, great food and a wonderfully friendly and personable staff. What more could you ask for in a pub?