Just in time for this past week’s Canada Day celebrations, Trestle Brewing Company in Parry Sound celebrated their official ribbon-cutting and Grand Opening. I was lucky enough to visit the site just prior to and just after that grand day. (Consider it a “Grand Opening” sandwich)

The first thing that struck me about Trestle was the crisp, refreshing and easy-drinking nature of their first flagship beer, their Golden Ale. It was a gift from our friend Caroline. I actually did a beer tasting video for it back in April, before the brewery officially opened.

One of the things I like about their Golden Ale is that, while delicious and refreshing in its own right, because it is brewed in a smooth pilsner style, it is an easily approachable beer even for those who are new to the craft beer scene. Thus, a person whose beer explorations normally don’t move much beyond the standard Coors and Budweisner offerings can appreciate a fresh, crisp and refreshing locally brewed beer which might just open up their eyes to the further taste explorations that enjoying craft beer can bring.

The second thing that struck me was just how amazing that Golden Ale tasted on tap. My son and I arrived in Parry Sound on the Wednesday prior to Canada Day weekend right after we’d spent several hours doing a TreeTop Trekking adventure in Horseshoe Valley. Because he was starving (and had enjoyed the Boston Pizza location across the water from Trestle’s location), we first stopped in there to enjoy a late lunch/early dinner.

I, of course, was delighted to see that the local Boston Pizza carried this locally brewed beer, and enjoyed a few glasses of the beer there, along with some delicious food. I’m happy to support craft breweries and also happy to support restaurants that carry selections from local breweries. 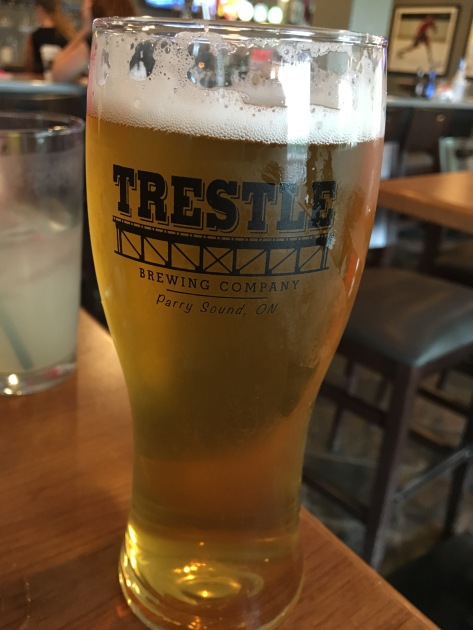 And the third thing I was struck with was the genuine and friendly nature of the people at Trestle Brewing. They were as warm and inviting as their location was picturesque and inspiring.

When we arrived (prior to the actual grand opening), co-founder Chris greeted me in the parking lot, welcoming me to the location with an apology on the delays related to a specific location based liquor licence, which was preventing them from being able to sell anything or do growler fills yet. But he gave me a quick ad-hoc tour, showing me around and talking a bit about their plans, while letting me take a bunch of pictures. (Below is a collage I shared on Instagram of the place in those “last minute” preparing for the opening activities that the staff was engaged with)

A few days later, on our return through Parry Sound, my son and I stopped in for a quick visit. Because the place was hopping and filled with so many beer enthusiasts, Alexander and I opted to eat somewhere else (Yes, that same Boston Pizza where I knew I could get Trestle’s Golden Ale on tap) and we picked up some cans to go as well as a few t-shirts for Liz and I (because we love wearing matching t-shirts to prompt gagging noises from the kids). But not before snapping a few quick picks of the grand opening weekend activities. 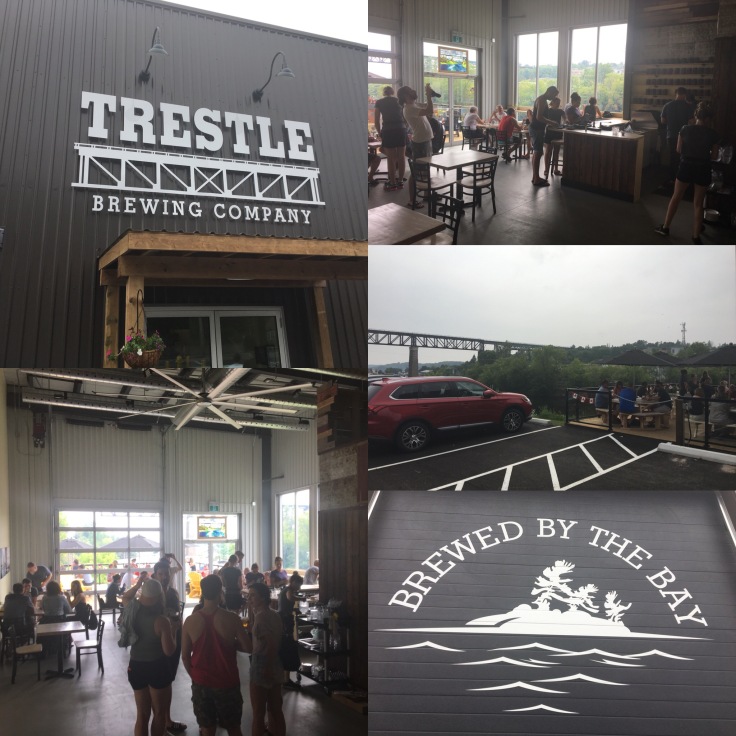 Their second beer, the Red Rock Rye Porter, is rich, creamy and delicious and nicely provides yet another style of beer for beer enthusiasts to enjoy. The brewery currently has their two first beers on tap, with a number of taps that are currently serving as guest taps from other craft beer places. But I learned that those taps will soon host four of their core year-round brews with two rotating seasonal taps, a cider tap and a tap reserved for another Ontario Craft Brewers guest.

It was awesome to be able to visit such a picturesque location that serves some great beers.

If you are lucky enough to live nearby, you now have a great place to hang out with fellow craft beer lovers and folks who genuinely enjoy their spirited location and attitude.

Or, if you are like me, where Parry Sound is a regular stopping point between Waterloo and Sudbury, you might have the pleasure of a fantastic place to stop along the way. I’m pleased to know that I have a great place to stop in and pick up some of their great beers. Or to perhaps enjoy a quick meal and a fine brew. (After all, I still need to enjoy the experience of drinking one of their Golden Ales from their brewery location while looking out over the water under the trestle bridge)

(And, if you’re not able to visit the location in person, you CAN still enjoy their beer via selected LCBO locations as well as various restaurants and licenced grocery stores – here’s a listing of where you can buy Trestle beers)

So, a huge congrats to the folks at Trestle for a spectacular grand opening weekend, and a nod to the many more beers from there that I am sure we will be enjoying over the years.