Yesterday was St. Patrick’s Day. If you partook in the festivities, perhaps this morning you are feeling a little groggy. Perhaps, if you were like the tens of thousands of students wandering around the streets of Waterloo yesterday near Ezra Street, you were feeling groggy by mid afternoon.

On our own way over to Arabella Beer Park to check out the featured pours from Cascade Brewing, we witnessed more than one young person who were close to falling down drunk.

I’ve always been fascinated with the terms and words that we use to describe things. Like the word groggy, for example.

And that word is derived from the term grog, which can refer to a variety of alcoholic beverages.

The term grog originally referred to a drink made with water and rum (a 4:1 ratio), something 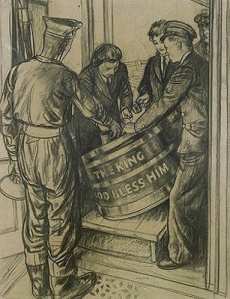 that British Vice Admiral Sir Edward Vernon introduced to the navy squadron he commanded in the 1740’s. Vernon wore a cloak of grogram cloth and was given the nicknames of Old Grogram or Old Grog.

Because fresh water was important for sailors on long voyages, and it was difficult to keep algae out of the fresh water, casks of water tended to have beer or wine added to it, to allow it to maintain freshness and make it more palatable. Beyond 1655, when Jamaica became part of the British colony, rum became the alcohol of choice. But Vernon (Old Grog) introduced a further watering down and reduction of the alcohol content for his sailors.

Old Grog’s watering down of the rum went hand-in-hand with the change of the daily rum into twice daily. This had the combined effect of reducing the alcohol in the sailor’s blood stream in order to curb drunken brawling aboard the ships under his command as well as a method to save money and allow rations to last longer.

The term grog eventually took on the meaning for virtually any cheap and diluted drink.

Modern versions of this drink are usually made with hot or boiling water, and sometimes include lemon or lime juice, cinnamon, or sugar to add flavor. Apple cider is sometimes substituted for water. In Sweden, the term grog is used to denote any drink that has just one kind of liquor (most commonly vodka or brännvin, cognac or eau de vie) and one kind of a non-alcoholic beverage. In some parts of Europe, the term grog is used for a hot drink, usually made of black tea, lemon juice, honey and a splash of rum. Grog is a popular winter drink, said to be a remedy for the common cold.

So, feeling a little groggy this morning? The most common advice includes drinking plenty of water. (Ideally, you did that WHILE you were drinking, but if you didn’t, don’t delay, get that water back into your dehydrated body as quickly as you can). If your stomach is up to it, consuming foods high in electrolytes can also help. Easy to digest foods like cereal or toast might be the easiest to consume.