Blue Me at Moon River 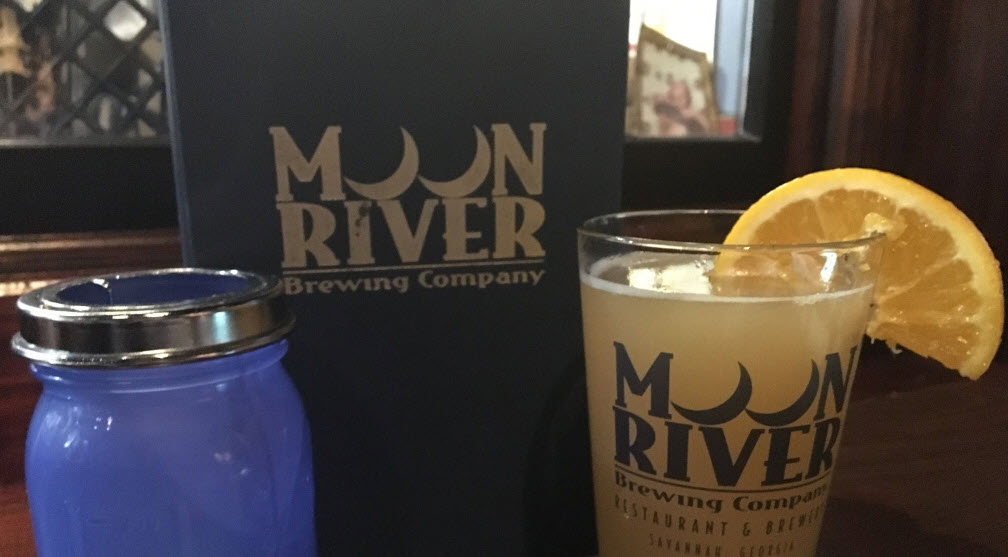 Last summer (the summer of 2017), Liz and I drove from Ontario down through the Eastern United States on our way to a conference I was attending in Orlando, Florida. We figured it was the perfect opportunity to explore as many breweries and fun beer bars as we could along the way. And as a bonus, several of the stops along the way included haunted locales.

Such as the afternoon of July 25th when we were in Savannah, GA and popped into Moon River Brewing Company. Admittedly, I wasn’t in the finest of forms – I had been recovering from a nasty bout of food poisoning from the night before (that will definitely be the last time I eat raw oysters) and that combined with the heat and humidity of Savannah at the end of July was slowing me down quite a bit.

That’s part of where the “Blue Me” comes from.

A second part of the blue comes from the fact that we didn’t get a chance to talk to any of the staff there about any supernatural experiences. The bar, where we normally like to sit because that way you can get to talk to the bartender(s), was packed and busy. We ended up with a table and our server didn’t have any fun ghostly stories to share. Oh well, we always take our chances.

A Savannah Morning News article references staff members experiencing beer bottles being thrown at them as well as odd and eerie shadows walking by.

The billiards room is alleged to have a ghost that goes by the name of Toby. “Toby is known to breeze past you or even push you out of the way,” Christopher Lewis said in the Savannah Morning News article. “We don’t know why he’s here, but he likes to play tricks on people.” And on the third floor several people have spotted an elusive lady in white. She was even captured on video by a team of ghost hunters from the SyFy Channel.

On the Moon River website, there’s a video from TAPS that shows an eerie fog and orbs floating through an empty room. It also shows a chilling short shadow figure moving about behind a pool table. The short video above (complete with X-Files theme music) shows the eerie sights.

There is, of course, a much longer video on the Daily Motion website featuring Ghost Adventures’ visit and overnight stay at Moon River Brewing Company.

We didn’t see or hear about anything supernatural that afternoon.

But we did enjoy the ambiance of the brewery. And the food was delicious. I’m also a huge fan of the Moon River Brewing logo and artwork. (Fortunately, we have a coaster from there in our home bar)

Because I was on a mostly water diet, I ended up doing something I rarely do. I only had a single beer there: the Wild Wacky Wit WItbier. It was light, citrusy and fruity. Just what the doctor ordered as a relief from the heat and from my tummy issues.

And that leads to the third reason I was a bit of a blue moon. I’m also a little blue that I didn’t get a chance to try their Apparition Ale, which was no longer in production at the time we visited. I mean, this ad alone makes me want to help make it disappear. 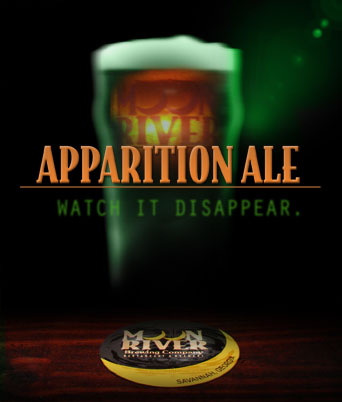 Hmm, does that mean we need to keep an eye out for it so we can return for another visit?

I’m up for that. Perhaps then you won’t see me standing alone, without a dream in my heart, without a pale ale of my own.